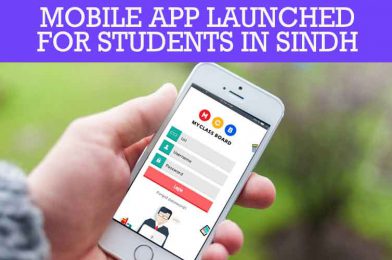 The two most ministries seen these days, health and education have again taken the lead in launching a mobile application for the students. Sindh’s Education Minister said that they are not in a position to open schools even after the Eid holidays as the cases of corona keep on increasing. Even if the schools are open, it will be useless because parents will not feel safe in sending their children.

Read also : Grant for all universities increased by HEC

As a result of that, an android mobile application has been launched with the joint efforts of School Education Department, Sindh and College Education Department, Sindh. This mobile application will be a platform of distant learning for the students from Kindergarten (KG) to class 5. Keeping in view the regional and cultural dynamics, the application is available in English, Urdu and Sindhi language with same as the method of teaching too. The minister further added that same sort of educational reforms will be implemented through cable operators and FM radio on the same lines of federal government.

He concluded the meeting while criticizing the decision of judiciary to open the shopping malls and bazars on the occasion of Eid. The entire world is facing a global health crisis and we are more worried about Eid shopping. Debate continued by adding that provincial government of Sindh strictly abides by the constitutional rights of every institution, therefore, highest court in the country shall be paying attention to its own matters. Now as the shopping malls and one of the major public gathering places are opened, minister urged the authorities to open schools and other higher education institutes too by saying that there is nothing more important than education for a country. Thus, there is no argument now against the opening up of educational institutes.