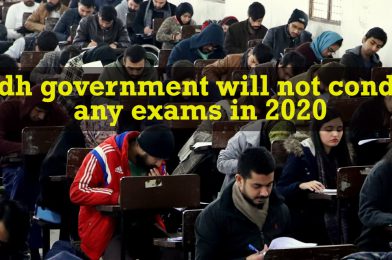 Too much of interest has been given in last one month to the exams and decisions taken by the provincial and federal governments. One of the recent developments suggests that Sindh has announced in a policy statement that there will be no exams from class 1 to 12 across the province and all would be promoted. Sindh’s Education Minister, Saeed Ghani said that decision was made with the agreement of steering committee on education.

However, the decision regarding those students who had failed in more than 40% subjects still remain unanswered. The minister said that they will be given passing marks and shall be promoted into next grades. Furthermore, the students who had failed in matriculation or intermediate exams and want to improve their marks via papers will not be provided any opportunity of such nature in 2020. The same opportunity could be available next year.

Sindh government has made a decision contrary to Federal government as Islamabad decided to conduct a special exam for those candidates who failed in more than 40% subjects. But Sindh will promote all students by grading passing marks rather than conducting any special exam. The students of 10th and 12th classes will be given marks based on previous year with adding 3% marks making their total obtained score. Whereas, 9th and 11th students will be promoted without any marks and their marks of 2020 will be determined using their performance in 2021 with the same formula used in this year.

As far as, conduct of classes are concerned, all institutes are encouraged to start online classes but no one shall be allowed to open their gates as strict actions will be taken all such instances. The institutes shall remain to close as per the orders of all provinces and federal but Sindh’s education minister said that till any further orders, educational institutions shall remain close.