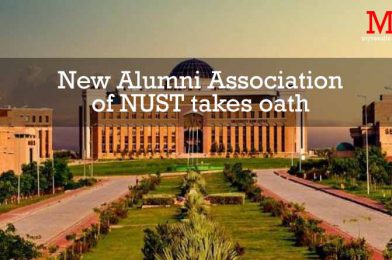 National University of Sciences and Technology (NUST) has been in the news for numerous good reasons. They were ranked in the QS Rankings among the top 500 universities of the world and were recently included in top 50 young universities of the world. To all that good news are certain professional reasons and one of the reason of such professionalism is the bodies operating within the university. On Friday, NUST’s new alumni association has taken oath for their duties to begin.

Due to spread of deadly virus and closure of institutes, an online ceremony was arranged in which 97 members were present. The ceremony was headed by Registrar of NUST, whereas, Rector and Chairman of Alumni Association were also included in the online ceremony. Alumni, who were interested in becoming a part of the association had applied in the month of February and elections took place in the last month with results being declared last week. The oath ceremony included the remarks of Rector, Registrar and Chairman of Alumni Association.