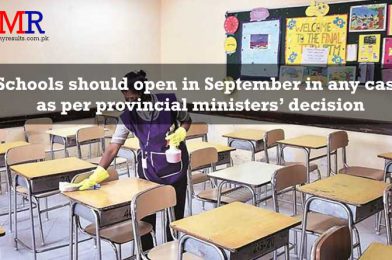 As per recent meeting of inter-provincial educational ministers, the opening up of educational institutes was decided. However, the date of opening up of schools was announced to be 15th September, 2020. The decision was unanimously agreed by federal and provincial ministers but the final approval was rested with National Coordination Committee (NCC). A special representative of Ministry of National Health Services was also present in the meeting which was made responsible for obtaining an approval from Health Ministry.

Sources say that various proposals have been discussed previously for the opening up of schools, hence, finally, one of those decisions have been taken which was mutually agreed by all. SOPs were also developed by provincial governments, federal government and schools’ association so that it is in compliance with global health standards with leaving out no other unattended matter.

The exams of 9th, 10th, 11th and 12th classes are already decided as per federal government’s decision but as far as other professional exams are concerned, they will be conducted under strict SOPs. All exams will be conducted by ensuring social distancing with wearing of gloves, face masks and sanitizers. However, another interprovincial meeting will be conducted in the first week of September, 2020. Overall situation will be assessed in the first two weeks and then the final decision shall be taken. Another point highlighted by provincial ministers of Punjab and Sindh were related to grants and financing of educational institutes. They stressed on helping the public and even private institutes by giving interest free loans as closure of institutes can lead them towards bankruptcy. It is high time that all educational institutes should now be opened.