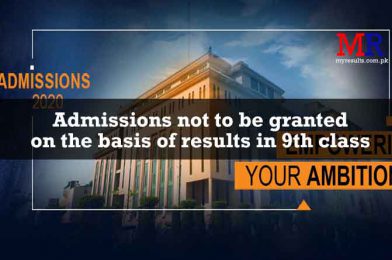 All the private and public sector colleges are advised by the Educational Ministry and Education Department of Punjab that no student shall be granted an admission into 1st year on the basis of 9th class result. Earlier announcement by the government in the month of May and June ensured that students will be able to get admissions on the basis of marks in 9th class but the same statement is suspended for the time being. Punjab government has made it clear that until the results of matric are not declared, no student will be allowed to take an admission in any of the colleges.

The notification suggesting this information was shared with all educational institutes on Wednesday which clearly stated that admissions shall be granted only after the results of matric are declared. Admissions schedule can only be released by colleges after Punjab board declares the result for current year. In addition to that, all those colleges violating the notification will result in legal action against them.