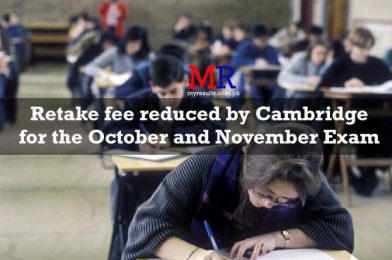 In order to respond to the disagreement of students and institutes, Cambridge issued revised grades and now have also reduced retake registration fee for the October-November exam. Students who are not satisfied with their awarded grades in May-June exams can appear in the exam for improving their respective grades. With a lot of pressure being exerted on Cambridge, the fee cut has been welcomed by most. Cambridge now recognizing the fact that there could be a large number of people appearing in the October-November 2020 exam, hence, they had reduced the retake registration fee to 50%.

Cambridge had cancelled the May-June exam due to outbreak of corona virus and announced a 4-steo process for awarding marks. Schools were asked to share the performances of students with predicting their grades. An announcement was also made by Cambridge which stated that students will be awarded grades on the basis of their performances and predicted grades by their schools. Students were similarly awarded grades in last week but that was in total opposition to what they had expected. Students rejected the results in large numbers and took social media to show their anger.

In response to such anger, Cambridge and Federal Ministry of Education also discussed the matter with one another. As a result, Cambridge is now in the process of announcing revised grades for all students. Schools predicted grades will now be given primary importance with higher grade being awarded to the students if Cambridge predicts a lower grade in comparison to school’s grade. Meanwhile, Cambridge has also advised the schools to communicate the changes in grades to their students so that they are aware of the arrangements being made by Cambridge for maximum facilitation of students.