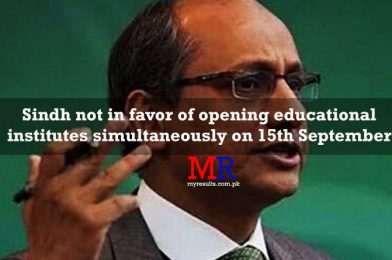 Education Minister of Sindh has advised all educational institutes to remain patient on the reopening as it can cause another crisis situation for the big cities and province at large. He was the first one who advocated for the reopening of schools among all provincial educational ministers but his views are not to open the schools on a same date. In the meeting of Sindh’s Steering Committee on Education, Saeed Ghani, Sindh’s Minister of Education said that schools shall be opened in a phase wise manner rather than simultaneously opening them on 15th September, 2020. All schools shall be allowed to open their gates but for only a few classes rather going back to the normal routine.

Steering committee and Minister were of the same views and recommendations were brought on the table in which 9th and 10th grades should be opened from 15th September, 2020. After careful observation and implementation of SOPs, grades 6 to 8 could be opened in the next week starting from 21st September, 2020. In a similar manner, after one or two weeks, students of grade 5 to 7 can be allowed to attend the schools. Remaining grades can then be opened after another week and in this manner, by the mid or end of October, all schools will revert back to their normal routine.

The reason of implementing such a model is that a small number of students and staff can be monitored effectively and if any crisis situation comes up, it could be managed and controlled immediately. On the other end, he also solved the long questioned matter of students getting admissions in private colleges. All of these colleges are demanding marks sheet on which he instructed Additional Secretary of Education to prepare and deliver marks sheet to all the students in coming week. The meeting was attended by all key stakeholders of Education within the Sindh province.

Lastly, Chairman of the Secondary and Inter Boards of Sindh informed to all that the results are about to be publicized soon. Final dates can change but there are high possibilities that 9th and 10th class results will be announced on 15th September, 2020 with 11th and 12th class results to be declared on 30th September, 2020. The marks sheets of all these students will be available after one week of results announcement.