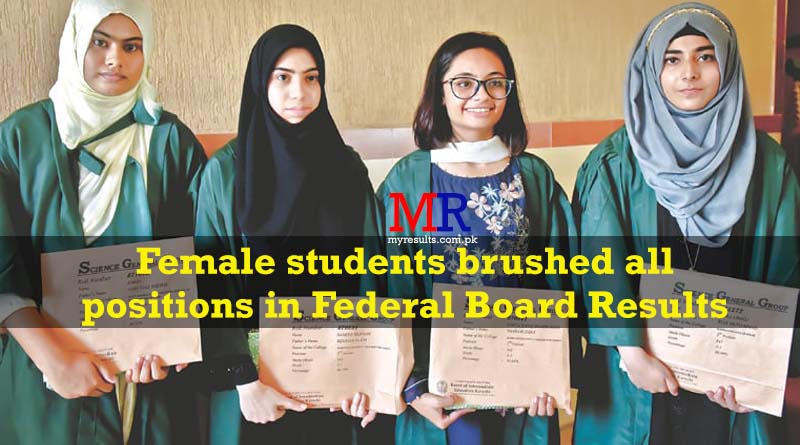 Federal Board of Intermediate and Secondary Education has announced the result for intermediate classes which is termed as Higher Secondary School Certificate (HSSC). The exams were not conducted owing to the corona virus pandemic and students were to be promoted as per new promotion policy of government. Students of 12th class were to be awarded marks based on previous class with 3% of additional marks in comparison to the previous year marks of students. Results were announced on Thursday which were welcomed by most of the students and institutes. While the results were welcomed by all, female students were able to secure most of the positions.

A special ceremony was arranged in Islamabad in which all position holders were invited and female students clearly outnumbered the male students. Chief Guest of the event was Parliamentary Secretary for Federal Education and Professional Training, Ms. Wajiha Akram. Ceremony was also attended by parents of the position holders, teachers of various institutes while it was hosted by the Chairman of Federal Board, Rao Atiq Ahmad. The results suggested that there were more than 70,000 students who appeared for exams including private, regular and repeating students. Passing percentage for the current year stood at 93.22% with 66,635 students passing the exams.

As far as the positions are concerned, Zainab Afzal from Gilgit, Haleema Gul from Islamabad and Muhammad Hassan from Islamabad too secured 1st, 2nd and 3rd positions respectively in the humanities group. In Pre-Medical group, all top three positions were secured by female students including Saira Azhar, Aneesa Rashid and Mahnoor Fatima. All students belonged from Rawalpindi. In addition to that, Minahil Nadeem and Ayza Amer were able to stood 1st and 2nd in Pre-Engineering group with 3rd position being shared between Muhammad Ahmed Mohsin and Rakhmeen Gul. A foreign student was also able to secure position in results. In General Science group, 1st position was shared between Hira from Rawalpindi and Suman Asim from Saudi Arabia. 2nd and 3rd positions were also secured by female students including Shifa Imran and Nimra Mushtaq.

Lastly, commerce group was only a different one in which 1st and 2nd positions were shared by male students including Khalid from Rawalpindi and Said Ali from Qatar, whereas, 3rd position was secured by female student, Mahnoor Qaiser. All parents, teachers, schools and Federal board was being congratulated by Parliamentary Secretary. She said in her keynote address that conducting exams was a different challenge altogether for the government this year, hence, there was a need of immediate plan B. The policy which was adopted for promoting students is applied by Federal Board which is appreciable in its own manner. She also appreciated the efforts of Madrassahs in mainstreaming themselves as it is a major player in exams.